Our garden is really producing right now. I have way more tomatoes and yellow squash than I can use. Every day, I go out and pick more. So I was excited to hear about Ample Harvest. They promote sharing excess garden produce with local food pantries. This reduces unnecessary food waste.

Food pantries can register with Ample Harvest to indicate that they will accept garden produce. I went to their website and put in my zipcode. There were quite a few pantries within a 10 mile radius listed on the site. The site states that you should call to find out donation procedures before heading out with your garden goodies.

I called one and found out they don’t take produce. So I informed them that they were listed with Ample Harvest and might want to have themselves removed.

On the second call I had success! It was a pantry about 7 miles away and they accept produce. So I hopped on the e-bike (more on that later) and I rode over there. They were happy to have the squash and tomatoes and told me I was welcome to bring more. And the bell peppers which are about to come on strong in the garden.

I don’t like throwing away food and the garden has a few weeks every year where it just produces a bonanza of food. So having a place to take the food where I know it will go to good use was worth the time it took to get it over there.

Just for fun we put the GoPro in the fish pond in our front yard. We got a “fish-eye” view of all of them swimming around. This isn’t the most exciting video in the world, but I do find it soothing and relaxing. We are already talking about which angle we want to see next.

So if you want to see koi, goldfish, bluegill, and minnows swimming around in our front yard pond, here you go…

I cooked up the last of the green tomatoes a few days ago. They keep pretty long in the refrigerator, but it was time for them to go. And with that we say goodbye to our garden produce this year. I made fried green tomato sandwiches with bacon, pickles, and chipotle mayonnaise.

First I sliced the tomatoes about 1/2 inch thick.

Then I put some flour in one bowl and some egg (slightly beaten) in a second bowl. In a third bowl I mixed some cornmeal with some salt and pepper.

Next I heated up a little canola oil in my cast iron skillet. And I fried the tomatoes to a nice golden brown on both sides. I drained them on paper towels.

While they were frying I microwaved a few slices of bacon. I also mixed a little chipotle sauce with some mayonnaise. And I got out the dill pickles.

To make the sandwhiches, I toasted some bread. Then I put on two or three of the fried green tomatoes, a little of of the chipotle mayonnaise, and a couple of slices of bacon. The Husband and I really enjoyed these. Yum! 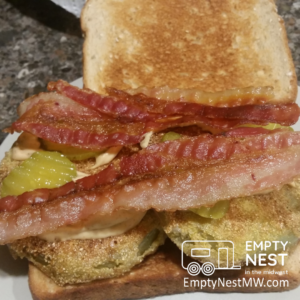 I prefer flavorful heirloom tomatoes in this receipe. Use tomatoes which are not at all ripe. They should be firm and crunchy.
Print Recipe Pin Recipe
Prep Time 10 mins
Cook Time 20 mins
Course Main Course
Cuisine American
Servings 4 sandwiches
Calories 560 kcal

Calories: 560kcal
Keyword Sandwich
Tried this recipe?Let us know how it was!

for tomorrow I may have to eat them.

I just brought in a bunch of vegetables from the garden. There is a hard freeze tonight. Some of these vegetables aren’t so tender and sweet, but we are going to eat them.

Along with cleaning out the garden comes other tasks which come with the cold weather, like winterizing the camper and pulling the morning glories off of the front porch. I already brought in the herb pots and put them in the basement.

And having seen some fighting and arguing on social media, along with people unfriending each other, it is good to remember that words matter also. It is so easy to hurt someone with a careless comment, and it might come back to you later. Choose your words carefully.