The Husband has been asking for roast acorn squash. Not the kind where you cut it in half, seed it, and throw some butter and brown sugar in the cavity. He specifically requested it peeled and cut into chunks with nothing on it. I have to admit I have never peeled an acorn squash before. I managed to do it without cutting myself and it tasted good in the end, so I was pretty happy.

It’s not that easy because of all of the grooves. So I started by peeling what I could. Then I got out my big knife and tried to cut it in half. Of course, the big knife got stuck, so then I had to get out a second big knife to relieve the pressure and free it.

Then I scooped out the seeds with a spoon. I’m pretty sure I sent a seed flying across the kitchen. I didn’t see where it went. I guess I’ll find that later.

Then I cut it along the grooves. This allowed me to get the rest of the peel off with my peeler. The pieces were slippery though and hard to hold on to.

Then I popped into a 400 degree oven. After about 20 minutes, I threw in a tablespoon of butter. Because butter makes everything better, right? Then I stirred it up and roasted it for about 20 more minutes, until it was starting to turn a beautiful golden brown on the edges.

I served it up with a spinach, mushroom, and bacon quiche. I was pretty happy with it and liked this savory version better than the kind loaded with brown sugar. And The Husband loved it! 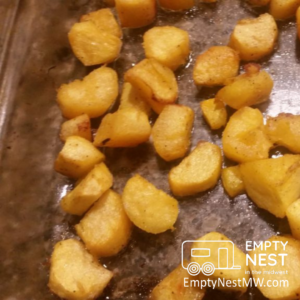 Calories: 180kcal
Keyword Vegetables
Tried this recipe?Let us know how it was!